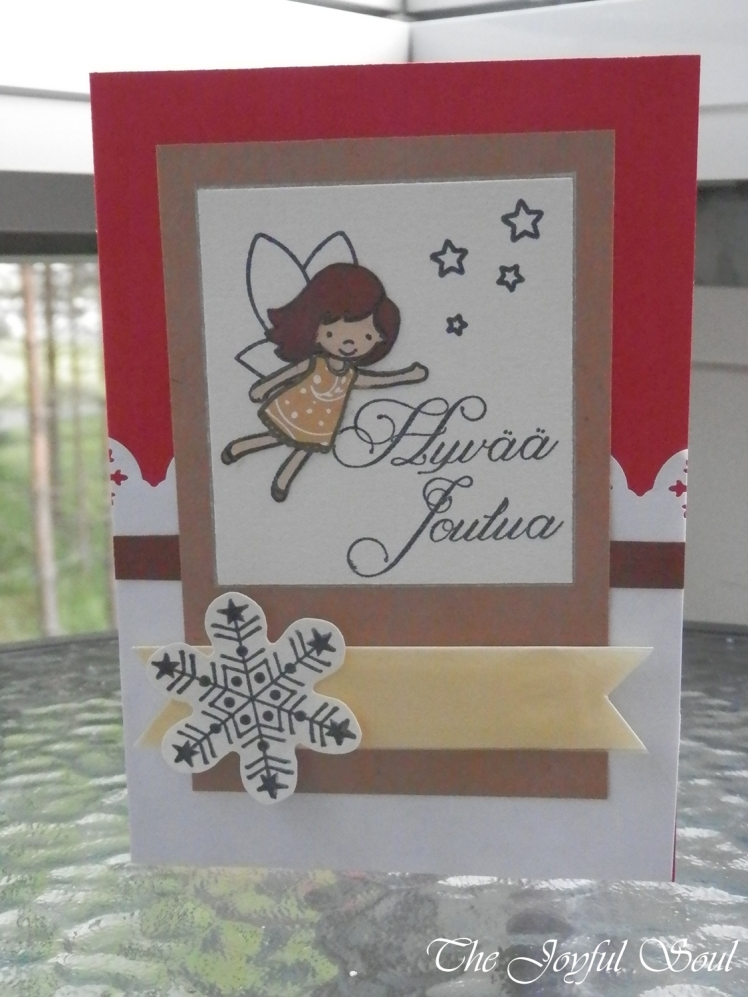 I decided to make another fairy card today, this one with a Christmas theme. It’s a response to rather a lot of challenges. One Crazy Stamper, Craftyhazelnut’s Christmas Challenge, and Craftyhazelnut’s Christmas Challenge Extra all look for a Christmas theme. The colour scheme comes from Color Throwdown – I thought it would be fun to use a non-traditional colour scheme on a Christmas card, though it turned out more difficult to do than I’d realised! Tuesday Throwdown asked for fairies or fantasy, whilst Pixie’s Snippets Playground requested using snippets. None of the sketch challenges I have in my list seemed fitting for what I wanted to do, so I went and hunted one down. I settled for this Mojo Monday sketch from a couple of years ago.

I started the card by working on my image panel. I picked out one of the fairies from Avery Elle’s Pixie Dust set and stamped her onto a square snippet of white card using Memento Tuxedo Black ink. I then started paper piecing. I actually ended up making three different versions of the dress because I wasn’t sure which one to use. All three were from Christmas patterned papers. I ended up settling on the muted yellow that you can see in the image. I used a deep chocolate brown for her hair, a lighter brown for her shoes (which were very fiddly to place!) and a pale peach/tan colour for her skin. Pretty much all the papers I used here were snippets. I used Tombow Multi Mono Liquid glue to stick all the pieces in place. At this point I also stamped the sentiment.

Incorporating the pale yellow was a bit of a trickier task. I don’t have any pale yellow paper, nor any suitable inks for making my own. I tried colouring a snippet of paper with yellow pencil but it didn’t look right. Then I remembered the yellow vellum I have and decided to use that overlaid on (the uncoloured side) of the strip of white paper. It seemed to work perfectly! I stuck the vellum to the white card, being conscious of where the adhesive was so that I could hide it, then cut the ends to form the banner shape.

At this point I began assembly. I used my tape runner to stick the image panel to the kraft base frame part. I decided to draw around the edge of the image panel with silver pen for a bit of added interest. I then used the tape runner to attach the white border punched panel to the lower portion of the card and trimmed the edges off to make it fit properly. I actually stuck it slightly wonky, but thankfully it isn’t obvious! I again used the tape runner for the chocolate-brown band which I adhered just below the snowflake border. The kraft panel was also adhered using the tape runner.

I then decided the image panel was missing something. I considered giving the fairy a wand, but instead decided to add some stars almost as if they were coming up from her outstretched hand.

With that done I adhered the banner using foam tape. I needed some sort of embellishment to go on top, as called for in the sketch, which would hide the adhesive I’d used to attach the vellum. I decided on a large snowflake – I can’t find information on where it’s from, sorry! Some generic brand stamp I think. I liked that its pattern has stars which ties in nicely with those on the image panel. I stamped it in the same black ink onto a scrap of white card, fussy cut it, and used my tape runner to attach it to the banner.

I’m pretty happy with how this card turned out. As you can see, my attempt at using non-traditional colours wasn’t entirely successful as the traditional red and white ended up dominating. Nevertheless I think I incorporated the other colours nicely. Looking at it now I feel like the wings and the stars feel unfinished. The Wink of Stella brush is on my wishlist, and I think a bit of that on the wings especially would give a nice finishing touch. I will have to remember to go back to the card and add that once I’ve bought it!