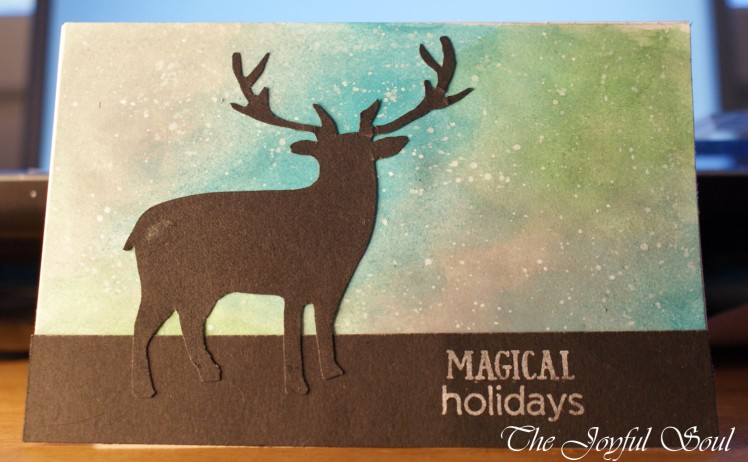 This card took a fair bit of forethought, which makes a change as I often throw my cards together in a hurried few minutes. (Okay, not literally.) The two challenges that were my main inspiration for this card where the Muse: Christmas Vision, which provided an inspiration card, and DRS Designs‘ colour challenge. I later decided to enter it to AAA Cards, who asked for blending, and Craftyhazelnut’s Christmas Challenge. 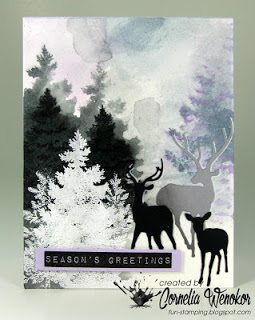 I knew immediately that I wanted to do a watercolour background using the colours I’d picked out from the colour challenge. I also knew I would need to build the colours up in layers. As such I started my painting yesterday evening, getting a layer of the grey and the blue down. I made sure each layer didn’t entirely cover the background, so that there would be some areas where the colour was blending together, and others where it was pure.

I added another couple of layers of colour in the morning before I left for work, and a couple more when I got home. I’d been keeping my layers quite light and watered down, but realised I wasn’t liking how it looked. So, slightly worried I was about to ruin it all, I decided to add more concentrated colour. 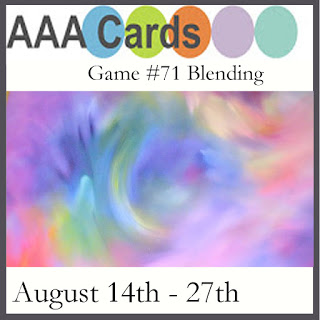 I went back in with (almost…) clean water on my paintbrush to soften out the edges of each colour as I applied it. I still wasn’t certain about how it would turn out but left it to dry for a little while whilst I decided what to do next. When I came back I was very pleased with how it looked!

I wanted to add some splatters so I went ahead and used my paintbrush to flick some watered down white paint across the panel. I had intended for it to be like snow, but I feel it looks more like stars! I like it, anyway.

Next I needed to do my reindeer. I had been intending to stamp directly on the painted panel but I decided against it. Partly because I was terrified of ruining it, and partly because my deer stamp is kind of… pixelly, I guess. So I didn’t think it would look right. The stamp in question is Urban Stamps’ Christmas in the Country – Stag.

I realised I could solve both those problems by stamping onto black cardstock, and luckily I had a big enough piece in my stash. I stamped the deer on with black pigment ink which is just visible against the cardstock, but barely. I guess if you don’t know it’s there you probably won’t notice it! I then fussy cut it (which was difficult, because black on black, and no actual outline…)

I decided to cut a strip of black to ground the stag as well. Conveniently enough that doubled as my place for my sentiment! As I still haven’t managed to get a set of Christmas sentiments (and “Meowy Christmas” didn’t seem like it would work…) I created my sentiment using a mixture of stamps from Avery Elle’s Pixie Dust (“magical”) and Altenew’s Halftone Happy (“holidays”). I used silver pigment ink, though if I’d been at home I probably would have done silver heat embossing instead.

Assembly was very straight forward. I used my tape runner to adhere the strip with the sentiment to the painted panel, and Tombow Multi Mono Liquid glue to attach the panel to the cardbase as well as for the reindeer. 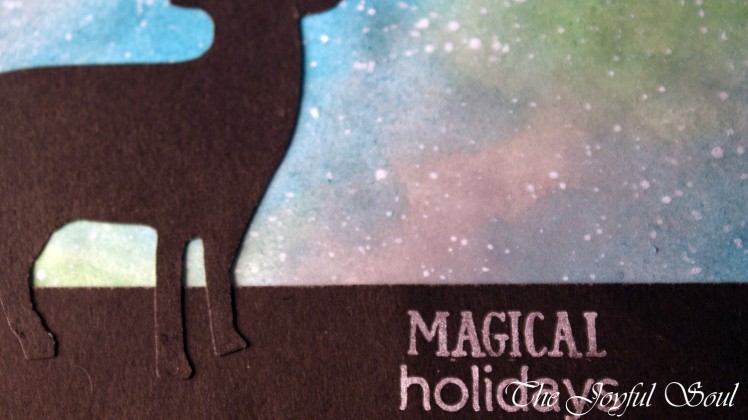 I’m ridiculously happy with how this turned out. I adore the background. Considering I really didn’t think it was going to work I feel it came out fabulously! I’m so pleased!