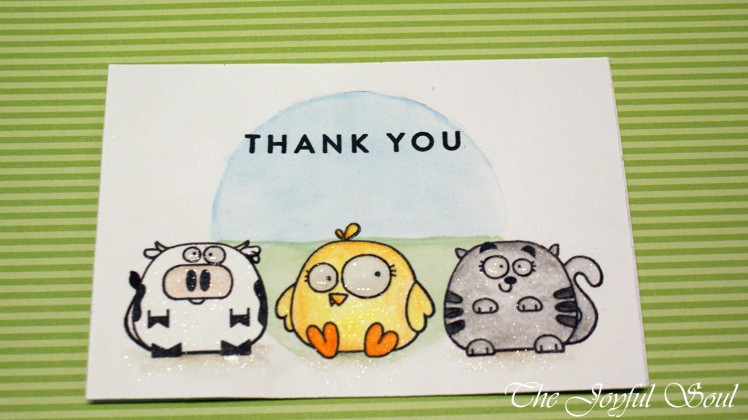 Here’s the second card I want to share with you today. This one caused me some trouble and I’m not as pleased with it as I could be… Its creation was inspired by a few different challenges. I started with Paper Smooches‘ November Challenge which is giving thanks and tied in the CAS Thank You challenge from Perfectly Created Chaos. I decided to use the colour palette from Color Throwdown. As I had already decided to have three little creatures on my card Simon Says Stamp Monday‘s trio-tastic challenge seemed a good choice. Finally I decided to enter it to Addicted to Stamps and More‘s anything goes challenge.

I wanted to use some of the stamps from Paper Smooches’ Chubby Chums set. Given the colours I could use I decided on the chick (for the yellow), cat (for grey), and then the cow (because it could remain neutral). I decided I would incorporate the green and blue by painting a very simplistic background behind them. Rather than painting the whole card I chose to mark off a circle and paint that. I kept it very simple as I wanted the focus to be on the animals rather than the background. I used watercolour paints for colouring the circle.

Once the painting was done and completely dry (I worked on my other card whilst I waited for it) I went to stamp the animals only to realise I’d messed up… I’d been planning on doing the card one layer, but of course as I’d already painted I couldn’t just stamp directly onto the card. I did try, and see if I could paint over them in white but… wasn’t going to cut it. So I changed my plan and restamped the characters onto a snippet of the same watercolour paper I’d used for the main panel. I then coloured them in with my watercolour pencils and blended it out with my clear Wink of Stella.

Once all the colouring and blending was finished I fussy cut the images before gluing them in place with Tombow Multi Mono Liquid Glue. Having already stamped the images onto the paper meant it was very easy for me to line them up how I wanted them. It also meant that the un-fussy-cutable (because that’s a word…) parts of the cow, like its earring and tail, could be just cut away completely as they were already stamped on the panel and would appear complete once the cow was stuck in place. (I hope that made sense!)

I placed the panel in my MISTI and stamped my sentiment which comes from Avery Elle’s Petal Panel. I noticed that the animals looked a bit floaty, so I added a little shadow below them to help ground them. I then added Glossy Accents to their eyes for some extra dimension and shine.

All that was left was to attach the watercolour panel to a card base, and the card was done. 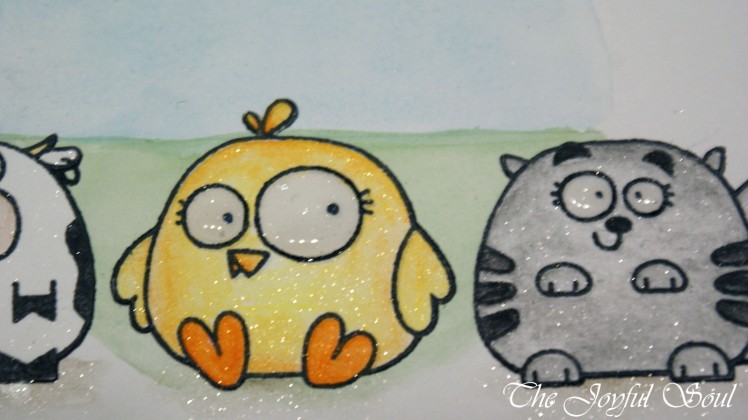 As I said, I’m not as happy with this as I could be. The paper warped more than I would have liked, and I should have tried to flatten it before attaching it to the card base because it ended up not sticking down well. Also in hindsight I think I should have put the trio higher up so that they were nearer the horizon line, and have less of a gap between them on the sentiment.

18 thoughts on “Thank You Cuties”