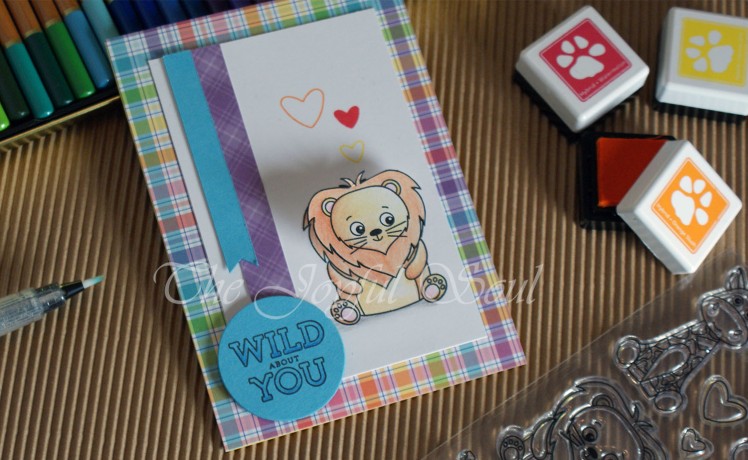 Despite the month nearly being over this is the first card I’ve made with this month’s card kit. I’ve been struggling to find the time for card making lately! I had the basic idea for this card before the kit even arrived, and I’m very pleased I finally had the chance to put it together. Though as I had a long day at work it is now, after finishing the card, rather late. So I’ll try to be quick writing this post! The patterned papers, stamps, coloured inks and action wobbler all come from the Wild and Colorful Card Kit.

I started by cutting down the multicoloured patterned paper to fit my card base. The card base is yellow, though the colour doesn’t really matter as it’s completely covered! As I want to maximise use of the patterned paper I gutted it, removing the centre so I can use it in future. I then cut a strip of the purple patterned paper. For the white panel I trimmed down a snippet that was almost the exact size I needed.

I stamped the head of the lion onto a smaller snippet of the white paper, then worked out where I wanted to position the lion and stamped the whole lion onto my white panel. I used my watercolour pencils to colour in the whole lion and the separate head. I tried to get both versions of the head coloured as close to identically as possible. I used Wink of Stella to blend out the colour after I applied it. I went back in adding a few layers of colour until I was happy with it. I also used some grey and black to add a shadow below the lion.

Next I die cut a snippet of blue paper with a circle and stamped a sentiment onto it. I cut another piece of the same paper and created a banner from it.

With all the elements prepared I laid out the elements as I would be placing them on the card to see if I liked them. I felt that the white panel was a little plain so I took some of the heart stamps and stamped them with three of the coloured inks that came in the kit. I also felt the sentiment needed something more so I added a touch of shading to the lower portion of each of the letters.

I used my tape runner to attach the multicoloured paper to my card base, as well as the purple and blue strips to the white panel. I then realised my white panel wasn’t cut straight so I had to peel the strips back off, trim the panel down slightly, and reattach them. I used my tape runner again to attach the white panel to the card base. I wanted the sentiment panel to be raised so I trimmed some blue craft foam and, with the help of my tape runner, adhered it to the back of the sentiment circle and then to the card base. Whilst the card could have been finished at that point I wanted some interactivity, so added the second version of the lion’s head (which I had fussy cut) onto its body using an action wobbler.

I’m really pleased with this card! I turned out pretty much exactly how I imagined. I love the bright colours and the cute lion. I’m really happy with how my colouring came together. Initially I wasn’t sure about the hearts I added, but I do think they work nicely. My only complaint is that the action wobbler is perhaps a bit too tall, though I already knew that from my previous time using one. I love the effect though!

MFT Sketch Challenge – Sketch/Layout (I shifted the circle as it worked better for me that way.)