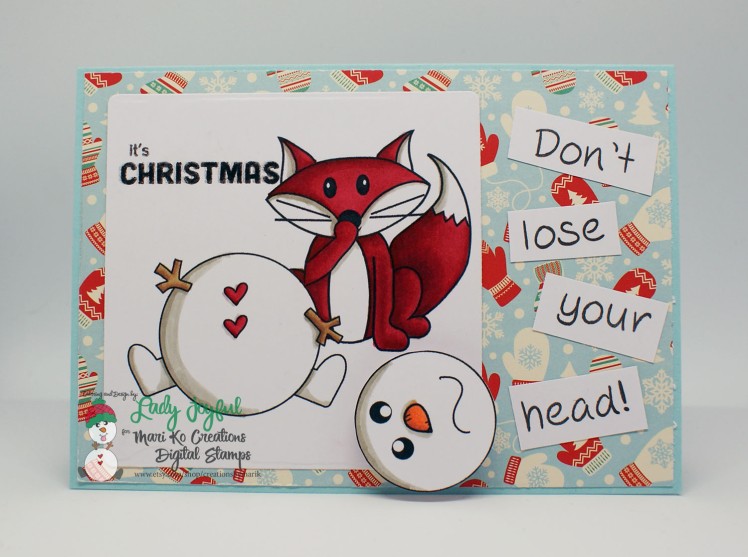 Have you checked out the new release from Mari Ko yet? If not, you should! The mid-November release is full of sweet images. This is my second card featuring images from this release – you can find the first card here. I couldn’t resist making an interactive card for this one!

I started by printing out the Little Snowman Loses His Head digi onto some alcohol marker friendly paper. I then used a combination of Spectrum Noir and Yosoo alcohol markers to colour the image in. I went with a fun red combination for the fox and used the same reds for the hearts on the snowman’s body.

I added shading to the white areas of the fox as well as the snowman using my lightest grey, which is a yellow grey Yosoo marker. I then used orange for the carrot nose, and some brown for the stick arms. I actually coloured the snowman’s head twice – once on the same panel as the rest of the image, and again separately. I then fussy cut the separate image.

I used a retired Memory Box square die to cut out the main image. I purposefully cut it so that the head of the snowman slightly overlapped the bounds of the square to emphasise the idea of the head escaping.

Next I worked on the rest of my card. I found a piece of Christmas-y patterned paper that I wanted to use with the image. I trimmed it down to be just smaller than a card base, then made myself a card base using some coordinating blue card.

I really wanted to have “Don’t lose your head!” on the card as it seemed fun. I created the sentiment using Lawn Fawn’s Jessie’s ABCs on a snippet of the same white paper I’d used for my image. I used my MISTI and stamped with MFT Black Licorice Hybrid Ink. I then trimmed it down into individual segments so I could arrange them randomly on the card.

I still wanted a more obviously Christmas sentiment, so I decided to add one directly to the image panel as well. I used some partial stamping/masking with a sentiment stamp from Simon Says Stamp’s Christmas Cats combined with “it’s” from a Heffy Doodle stamp set. (I think it was this one, but several of them have an “it’s” in, so any would work.)

Before adhering everything together I used a slightly smaller square die to remove an area of the patterned paper behind where the focal panel would be. I do this for two reasons – firstly it conserves paper, allowing me to reuse it in future, and secondly it can help reduce the weight of the card, particularly if there are a lot of layers involved. I’m frugal. If you’re not fussed then no need to do it.

I then adhered the patterned panel to the card base using double sided tape. I considered using foam tape behind the focal panel but as the head would be having volume anyway I decided against it. Instead I used more double sided tape for it, as well as for the secondary sentiment which I arranged in a higgledy-piggledy fashion.

Finally I added an action wobbler behind my fussy cut second snowman head and attached it over the snowman head on the base image.

I’m really pleased with this card! It’s actually not the idea I’d originally had. I was planning on doing a shaker card, but I ended up going with the action wobbler idea instead. And I’m glad I did, because it’s so much fun! It wobbles really well, and is perfect with the disgruntled look on the poor snowman’s face. I definitely think having the head come just beyond the boundaries of the square was the right choice as it gives the impression of motion even when the wobbler isn’t wobbling.

Christmas at Sweet Stampin’ – Anything Christmas