It’s time for another Watercooler Wednesday Challenge and this week we’re looking for anything feminine! If you’re after something a bit more masculine, check out the card I shared earlier today for The Male Room. Both this card and that one use washi tape, which is quite unusual for me as I don’t use my washi tapes very often! I mostly use them for holding things down rather than actually as part of a project.

For this project I started by printing Mari Ko’s Happy Birthday Pinwheel digi stamp onto some alcohol marker friendly paper. I used the version of the stamp that includes the sentiment.

I then started colouring the image. I used a combination of Spectrum Noir Illustrator markers and Yosoo alcohol markers. I used yellow green SN markers for the stems of the flowers. I then coloured the external parts of the petals with a combination of orange SN markers, and the interior parts with yellow Yosoo markers. As the yellow was a little brighter than I liked I went lightly over them with the lightest orange marker too, to make them look more cohesive.

I had originally planned on leaving the card at that, as a one layer card, but I felt there was a bit too much white space. I trimmed it down a bit and placed it on a yellow card base, but still felt something was missing. I decided to add some washi tape at the top and bottom of the card, then adhered the focal panel over the top with double-sided tape.

As a final touch I added a little sparkle with some Wink of Stella over the orange parts of the flowers. 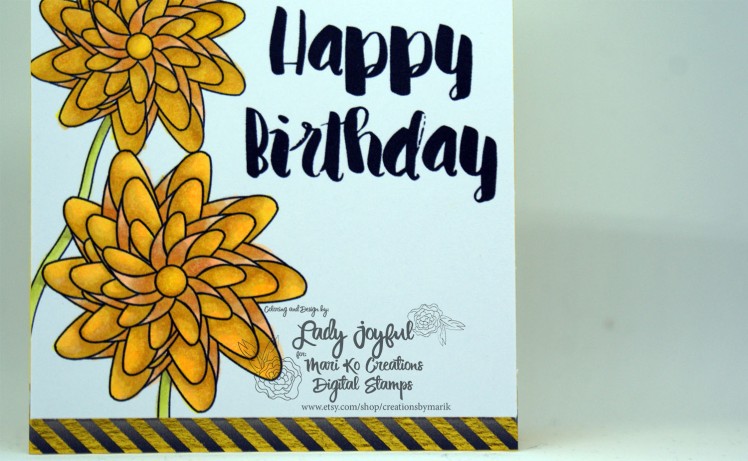 Like my card for The Male Room, this is another fairly quick and simple one. The most time consuming part was, of course, the colouring. Other than that though it was very quick to make. I definitely think that adding the washi tape was a good choice – I like the juxtaposition of the graphic gold and grey-ombre stripes against the softness of the flowers. This is another card that would be fun to recreate in a variety of colours, changing up the washi to suit each.

Addicted to Stamps and More – Anything Goes

Check out what the rest of the DT made: