It’s time for my final guest design creation for the Polkadoodles Crafting Challenge! Actually my final post should have already happened but I wasn’t able to do it as I was ill, so I’m making up for it with this one. The challenge is always an Anything Goes theme. This week the DT have chosen animal themed images with which to inspire you.

I first created my card layout in a word document. I used the Seesaw Friends – Horace & Boo image and combined it with a sentiment from the Winnie Celebrations 3 sentiment pack. Once I was happy with the layout I printed it out onto alcohol marker friendly paper.

I used my Spectrum Noir Illustrator Markers for colouring in the images, starting with the cat. I decided to colour her as a ginger tabby. (Although I do know that ginger cats are usually male!) I first laid down a layer of yellow, then added stripes with some muted orange tones. I then went over again with a tan colour. I left her lower face white and just added a little shading with a light grey  Yosoo marker.

I finished the cat off by adding some pink to her inner ears, nose and the pads on her paws. I then used some purple shades for her neck scarf and flower.

I chose dark brown shades for the dog. I kept the colouring fairly simple but did stipple on the nose a bit to give some texture. I then used a dark blue green colour combination for his scarf.

I wanted the seesaw to be plain wood, but didn’t want it to clash with the brown of the dog so I went with a very pale brown. I used dark greys for the centre portion of the seesaw.

I added a simple cast shadow beneath the seesaw using light green to give the impression of grass. I used a darker green for the leaves of the plant, and bought back some pink and yellow for the flower.

Finally I added some double-sided tape to the back of my panel and adhered it to my cardbase.

This image is so cute and I think it makes a lovely, fun card. I chose the particular sentiment I used because I felt like the shape of it mirrored the movement of the seesaw well, which adds an extra fun touch to the card.

I had a lot of fun guest designing for Polkadoodles and am sad that my time has come to an end! A huge thank you to the team for having me!

*Affiliate links may have been used in this post. When you buy products from a company after following an affiliate link, I will get a kickback at no extra cost to you. This helps me to keep doing what I do! Thank you for your support.*

Addicted to Stamps and More – CAS 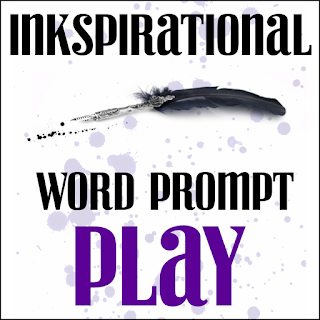 The House That Stamps Built – Anything Goes