We’re having a blog hop to celebrate the August release at Craftin Desert Divas! This is day two of the hop – you can find day one here and go to the beginning of day two here. There are so many cute new stamps – both digital and physical – as well as dies and stencils. Make sure to hop along (full hop list at the bottom of this post) to see the inspiration from everyone. Once you’re done hopping, head over to the Craftin Desert Divas shop to snag your special discount – 5% off through to the 19th. 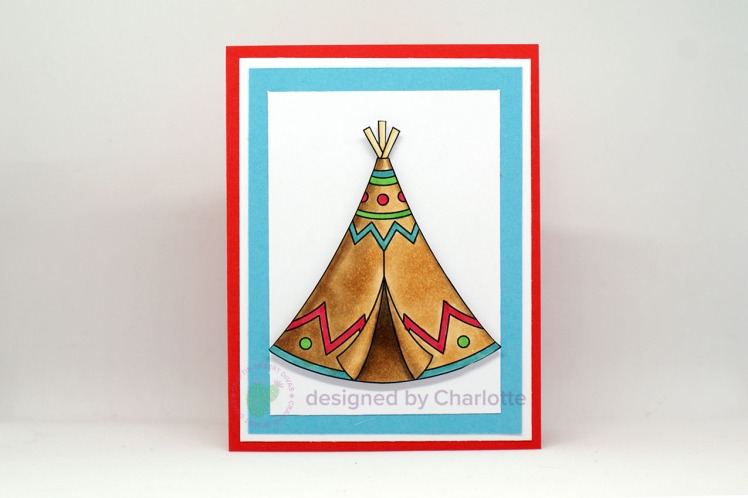 My first card uses an image from the Tribal Outdoor Scene set revealed on day one of the sneak peeks. I decided to make a feature of the teepee image. I printed it onto alcohol marker friendly paper and coloured with my Spectrum Noir Illustrator markers. One I was happy with the colouring I fussy cut it out and set it aside.

My paper layers were chosen based on the colours I had used for the teepee. I chose a red card base and topped it with a white panel. I gutted the white panel and used the removed centre portion for my top panel with a layer of blue in between.

I used double sided tape to adhere all my panels together, then added my teepee which I popped up with foam tape. I decided to forgo a sentiment, and may add one later.

The day two reveal included the Outdoor Camping Scene set. I again decided to use one of the images as a focal point. I chose the caravan, and printed, coloured and fussy cut it.

I decided to do some ink blending to go behind my image. On a panel of white I ink blended some Lucky Clover Distress Oxide to create a soft halo around where the caravan would be.

This time I chose a brown card base and added my panel directly to it with double-sided tape. I then used foam tape to add the caravan. I finished off the card with the addition of glitter peel offs around the focal panel, plus one as a decorative element in the caravan. I again skipped a sentiment.

I stepped away from CAS to make my next card which features elements from both scene sets as well as the moose that was revealed on day 3. I arranged all the elements digitally before printing so that my scene could be one layer. I then spent quite some time colouring it all in, focusing on having cast light from the fire across the design.

The colouring really was all this card needed. I did it in parts as it was a time-consuming process. Once I had all the colouring done I added some stars to the sky using my white gel pen.

I coloured and fussy cut another moose along with the totem from the Tribal Outdoor Scene set for my next card. I then added them to a white panel, adhering them such that the moose appears to be sitting on top of the totem pole.

I again used a red card base and added more interest with the addition of score lines on the visible red portion. I then finished off my card with some Nuvo Drops. I used Ebony Black on the eyes, and Strawberry Coulis, Sea Breeze and Limoncello to some of the red, blue and yellow areas respectively. 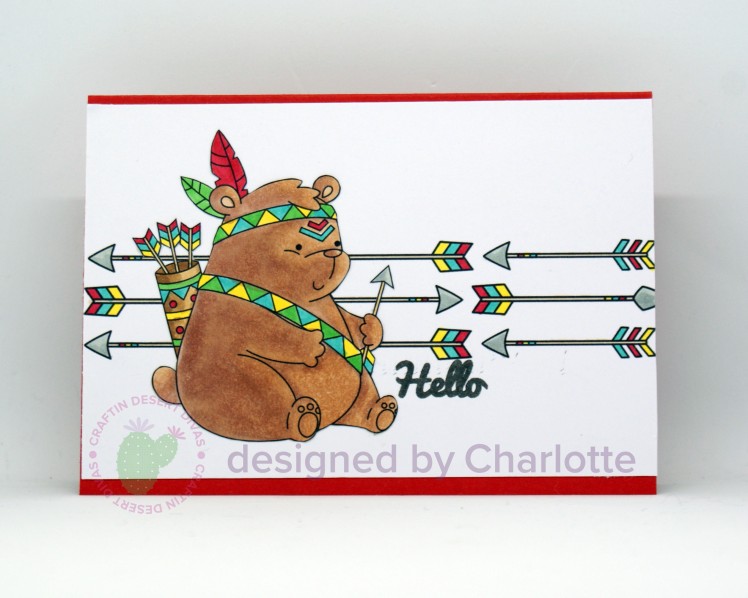 My next card uses the bear revealed on day four, along with a background of arrows from the Tribal Outdoor Scene set. I again printed and coloured with my Spectrum Noir Illustrator markers, and fussy cut the bear to adhere over my background.

I did add a sentiment this time, choosing one from Simply Said and adding it just beside the bear. I then adhered my panel to a red cardbase, leaving a slight red reveal above and below the panel.

For my second bear card I decided to create a little river scene. I digitally added the bear to the canoe, and also printed the Tribal Hedgehog. I masked off the bear and boat as well as a water edge line, and ink blended my river using Mermaid Lagoon and a little Cracked Pistachio Distress Oxides.

I’d originally planned to make a one layer card but decided instead to fussy cut out my river with the bear and canoe, and also fussy cut out the hedgehog element. I then cut a hill part from a snippet of green paper and adhered that to my card base. I added the fussy cut elements over top, completing my scene. As a final touch I used a fine-liner to add a line from the hedgehog’s branch, to make it look as though it is fishing.

I had so much fun playing with the adorable digis in this release! The tribal critters are all so sweet, and the scene elements go with them perfectly, whether you want to build a full scene or just use them to help enhance the focal element of your card. Do make sure you hop along to see the inspiration from the rest of the team as well as our guest designers, and be sure to check out day one of the hop too. Remember, if you get lost along the way you can always start over at the beginning over on the Craftin Desert Divas blog.