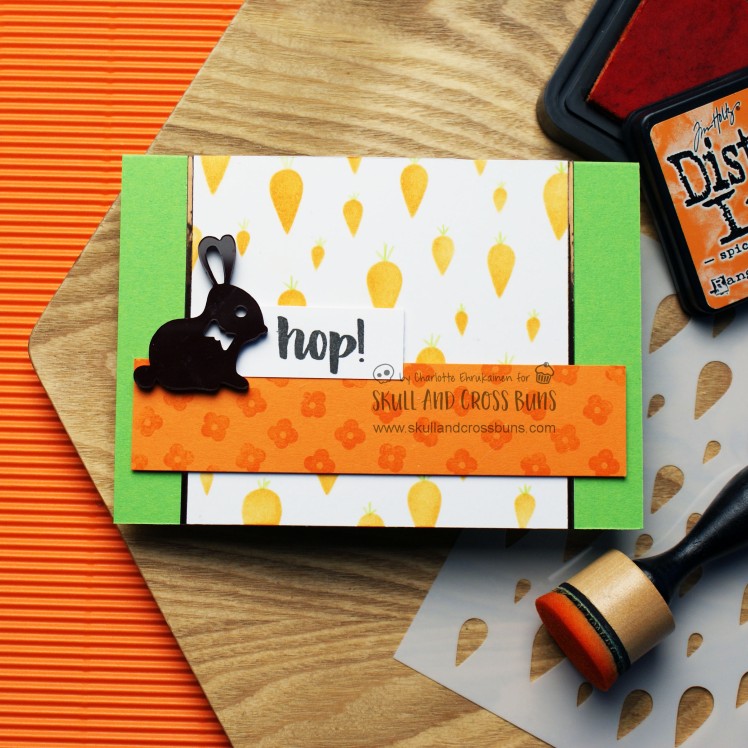 It’s starting to feel like Spring here in Southern Finland. We still have a little snow (and there has been the odd light snowfall now and then) but overall it is warming up and becoming sunnier by the day. With Easter on its way too I decided to make a fun Easter inspired card using some of the new goodies from Skull and Cross Buns. It took me a few moments to decide exactly what I wanted to do, but then husband had the bright idea of using the Raindrops Stencil to make carrots!

I began with a large snippet of white card which I trimmed to fit the height of my card base. I then used repositionable tape to adhere it from the back to the Raindrops Large Stencil. Once I had it in position I used Spiced Marmalade Distress Ink to ink blended all over it.

When I was happy with the ink blending I removed my stencil. I then used a light green colouring pencil to add green stalks to each of my ink blended carrots. I then set the carrot panel aside.

Next I took a snippet of orange card to create a contrasting panel. I used one of the small flowers from the Tropical Party stamp set to create a tone-on-tone pattern on the strip, again using the Spiced Marmalade ink.

For my sentiment panel I took a narrow snippet strip in white and placed it in my MISTI. I used the “whoop!” stamp from Quirky Sentiments to create my sentiment. I first masked off and stamped just the “ho” portion of the word using Altenew Jet Black ink. I then moved the strip to line the stamped “o” with the second “o” in the sentiment and masked again to stamp just “p!” This left me with a sentiment reading “hop!” I trimmed the white strip down and adhered a Choc Bunny embellishment to the left hand side of it.

Next I started assembling my card. I edged the carrot panel with mirror peel-offs in chocolate brown, then used Tombow Mono Multi liquid glue to adhere it into place on my green card base. I then used from tape to pop up the orange flower-patterned panel over the top. Initially I had intended to adhere the sentiment towards the right-hand side of the orange strip, but I had to change my plans slightly after accidentally getting an ink smudge on the carrot panel. I instead attached the sentiment strip towards the left, using Tombow Mono Multi where it overlapped the orange panel and foam tape where it passed it, which allowed me to cover the smudge so it was no longer visible. I considered adding some orange Nuvo Drops but decided there was already enough going on with the card and that it wasn’t necessary. 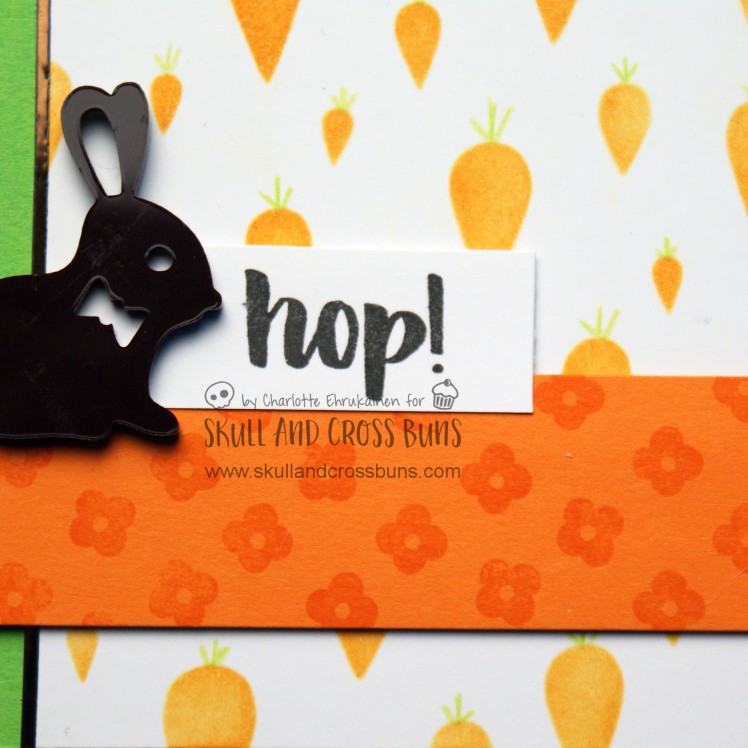 This card is a bit busier than I would normally prefer and at first I wasn’t sure I liked it for exactly that reason. But I do think it is quite a fun card, and it has grown on me. I love that I was able to repurpose the stencil to get carrots from it! It makes a perfect background to accompany the cute bunny embellishment. With the sentiment it has this card also is usable more generally rather than just being an Easter card. Be sure to check out the products over at Skull and Cross Buns if you’d like to have a go at this yourself!

P.S., use code DESIGNTEAM when you purchase from Skull and Cross Buns to save 10% on your order!

The House That Stamps Built – Easter/Spring 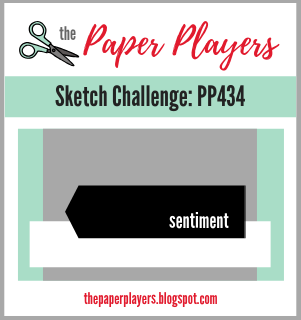